Heavy quarks and quarkonia in the QGP

Heavy quarks and quarkonia: a probe of the quark gluon plasma

In order to characterize the quark gluon plasma (QGP), we can study the characteristics of produced mesons containing at least one heavy quark (c or b). These quarks being produced in the beginning of the collision, they interact with the QGP and can be slowed down; due to their large mass, they are however not completely thermalized. Comparing their final distribution to the initial one tells us about certain properties of the QGP, such as its pressure and density. Such an approach is similar to tomography and heavy quarks are therefore qualified as (hard) probes of the QGP.


Our group develops models of microscopic interaction of heavy quarks with the environment and includes them in approaches such as "transport theories" to simulate the evolution of the heavy quark distribution in a QGP undergoing hydrodynamical expansion. The figure below shows the nuclear modification factor\(^1 \) measured by RHIC experiments STAR and PHENIX for electrons resulting from the weak decay of heavy quarks, as a function of \( p_T \), the transverse momentum with respect to the  beam axis. The deviation of this quantity from unity for large values of \( p_T \), well reproduced by our models and our transport code MC@sHQ, is one of the observations supporting the creation of a dense and hot state in these collisions. More recently, we have applied our model for the collision energy of the LHC in order to make predictions that are found to be in good agreement with the measured values.

Another  QGP signature formation is the "suppression" of quarkonia. Quarkonia mesons are composed of a heavy quark and  antiquark. Such states can exist only sporadically in the QGP since the flux tube that connects them is usually screened by temperature. Based on this argument, we expect a reduction in the production of quarkonia (especially \(J/\psi \)) in heavy ion collisions if the QGP is created. Such "suppression" was observed by the NA60 and NA50 experiments at SPS, followed by STAR and PHENIX experiments at RHIC, and finally by the ALICE and CMS experiments at the LHC. But the interpretation of data is ambiguous because other effects could affect the mechanism of quarkonium production, such as the recombination of quark-antiquark pairs initially produced and propagating through hot matter, as well as "cold" nuclear effects.

Our group develops evolution models of quarkonia in a hot medium undergoing hydrodynamical expansion. These models incorporate the process of dissociation of bound states by hard gluons and the inverse recombination process from independent heavy quarks. Particular attention is paid to the distribution of the latter at the time of recombination, which is described by our evolutionary models (see above), consistently with experimental observables. Delicate points of the approach are the experimental error on the total number of heavy quarks produced in the collision, as well as the ignorance of the quarkonium dissociation temperature and gluo-dissociation cross section. Our approach consists in constraining these quantities by relying on a reference system (Au-Au central collisions at RHIC) and making predictions for other systems. The Figure below summarizes our predictions for \(J/\psi \) suppression in Pb-Pb collisions at the LHC as a function of centrality (number of participating nucleons \(N_{part} \)). Comparison with the recent data of the ALICE experiment, demonstrating a constant suppression of the order of 0.5, suggests that the dissociation temperature is actually quite high, implying that quarkonium bound states could survive in the QGP. 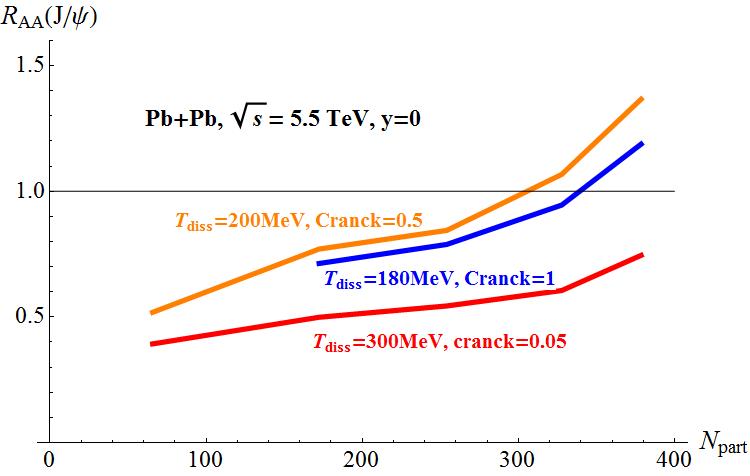 \(^1\)Ratio between a given type of particles produced in ion-ion collisions and having crossed the hot medium and the same particles  resulting from collisions between individual protons at the same energy.