Modeling of electrical sense in RAAMO and ANGELS projects

In the 50s, Lissmann was the first to postulate that some fish (in the meanwhile known as "weak electric fish") emit an electric field and had receptors specific to this field. Shortly after this event, he revealed the existence of a certain family of receptors. Following this discovery, it became clear that the electric fish perceive their environment by a sense that was hitherto unknown: the electric sense. Subsequently biologists have invested on this topic to characterize this sense (what forms of stimuli do the electric fish associate with obstacles, preys or conspecifics? how could the fish reconstruct the shape and distance of various objects of interest? etc.), so creating a axis of research known as electrolocation, ie the ability to perceive its environment through electrical sense, which goes hand in hand with the mathematical modeling of the physical sense. In 1996 Rasnow and Assad established a first physical model of electric image of a sphere on the skin of such a weak electric fish. With the rapid development of calculating machines, Mc Iver et al. then explored the possibility of representing the evolution of the electrical image on the surface of the fish during capture of prey ...

During the 10 past years, in parallel with advances in biology, a bio-mimetic current influences the field of robotics and muti-disciplinary teams of researchers are trained to test our understanding of "living robots". In this respect, Mc Iver and his colleagues were the first to create an artificial electric perception inspired by electric fish. However, the experimental system was fairly rudimentary (a couple of emitting electrodes for creating the electric field and a pair of receiving electrodes, all mounted on a Cartesian robot), as well as the objects considered, so that the issues in terms of physical modeling of the electrical sense (calculate basal field emitted by a sensor as well as changes resulting from the presence of an external perturbation) were quite limited. Despite this simplicity,  the algorithm used for the detection and localization of objects was rather demanding in terms of computing time, which prohibited any research in "real time". More recently, national project (ANR RAAMO) and international (FET project ANGELS) have emerged, one of the main objectives of which is to use the electrical sense to allow navigation of autonomous robot Eel (RAAMO), and even concerted actions of several robots which communicate and assemble into a single one (ANGELS).

However, previous work on modeling the biologists electrical sense passed mainly by the use of heavy numerical methods - for example boundary element method (BEM) - which cannot be used for real-time implementation yet necessary in robotics. Asked to participate in these projects, we have collaborated to establish a model reduction method based on reflections which allowed us to achieve a fast and well calibrated model then used by roboticists in their algorithm for object recognition and autonomous locomotion. The figure below illustrates the modulation and the currents through the three receiver electrodes of a sensor in the presence of an elongated outer sphere that moves in the direction of the axis Ox sensor. Solid dashed line represents BEM calculations while the solid lines are the results of our model, with a very good agreement. 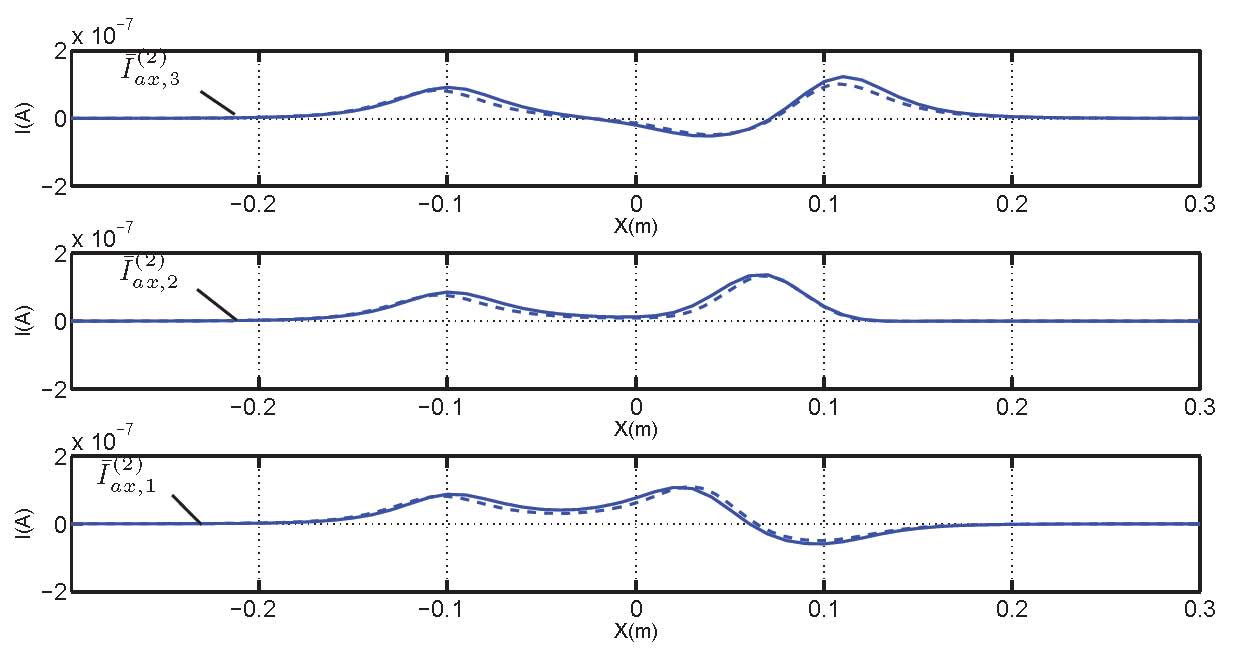