Installation of the MFT in the ALICE experiment

In the first week of December, a major milestone was reached: the Muon Forward Tracker (MFT) was installed in the ALICE experiment (LHC, CERN). This is a brand new trajectograph that will extend the physics programme associated with the muon spectrometer. The picture shows the MFT in place around the LHC beam tube. The detector is a 60cm diameter, 40cm long cone; collisions will take place 40cm in front of the detector. Subatech was responsible for and played a crucial role in several parts of the MFT: the flexible printed circuit boards (green stripes in the photo) that power, read and control the silicon pixel sensors, the entire mechanics of the detector core (the sensor support disks, the cooling system and the cone structure holding the disks) with the associated integration, the sensor power supply system and all the assembly steps. 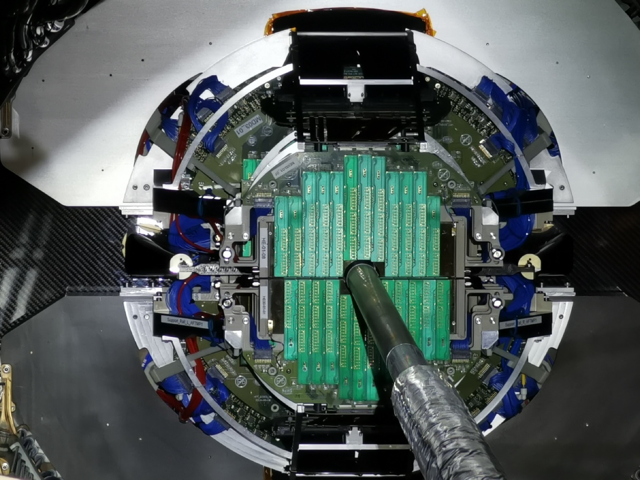 With this crucial step behind us, the period of commissioning the detector and integrating it into the ALICE environment to make it work with the other detectors in the experiment begins. The first collisions of the LHC Run 3 are expected in February 2022. A big thank you to all the technical staff of the lab who have contributed to this project since 2011 and without whom the MFT could not have existed.