The Fête de la science is a French science outreach event that promotes science to the general public. Created in 1992, the Fête is organised each year by the Ministry of Higher Education and Research. It was first called Science en fête until 1997, then Science Week from 1998 to 1999, and then Fête de la science from 2000 onwards. Sharing science and understanding the issues at stake in an ever-changing world is what this festive event is all about. It is also an opportunity to arouse curiosity and interest, to understand and learn.
On this occasion, thousands of scientists share their enthusiasm for science and technology with visitors through a variety of activities. The various departments and research laboratories open their doors to the public.

The 30th edition of the Fête de la Science took place from 8 to 10 October in Hall 6 West in Nantes. It was once again an opportunity to discover the work of researchers, to share knowledge and to explore new knowledge. As every year, thanks to a team of dynamic scientists and technicians, Subatech took part in this important meeting between the general public of all ages and science, by making them (re)discover the fog chamber, the KM3NeT experiment and also the map of nuclei in legos. This edition was a great success with several hundred participants during the weekend.

The 29th edition of the Fête de la Science took place in the Halle 6 Ouest in Nantes from 9 to 11 October with the theme "What relationship between humans and nature? " . But, as always, many other themes were on the programme. In spite of the particular context linked to Covid, about twenty establishments, associations and laboratories, including Subatech, were present and were able to adapt to the constraints with a lot of good will and good humour! A dynamic team of researchers and PhD students from Subatech showed visitors how a fog chamber works and the KM3NeT experiment.
The event was a sell-out for the entire weekend, with more than 1000 participants from Friday to Sunday. The small size of the event allowed for a quality visit that was particularly appreciated by the audience. 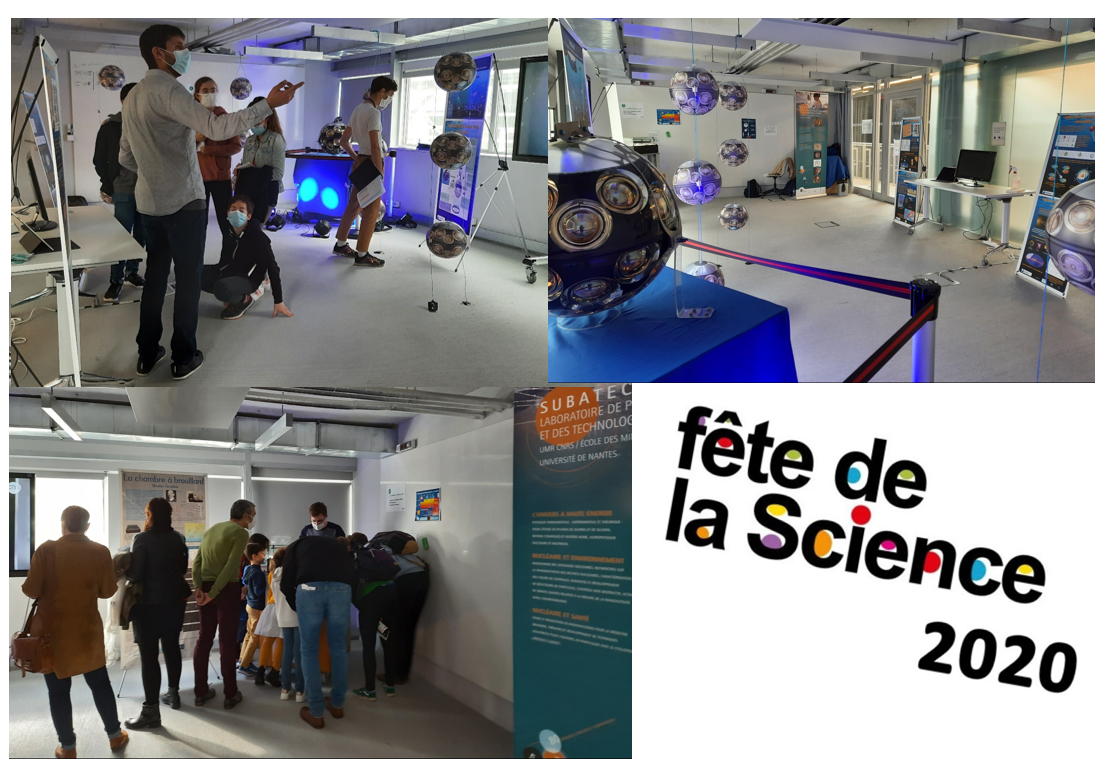 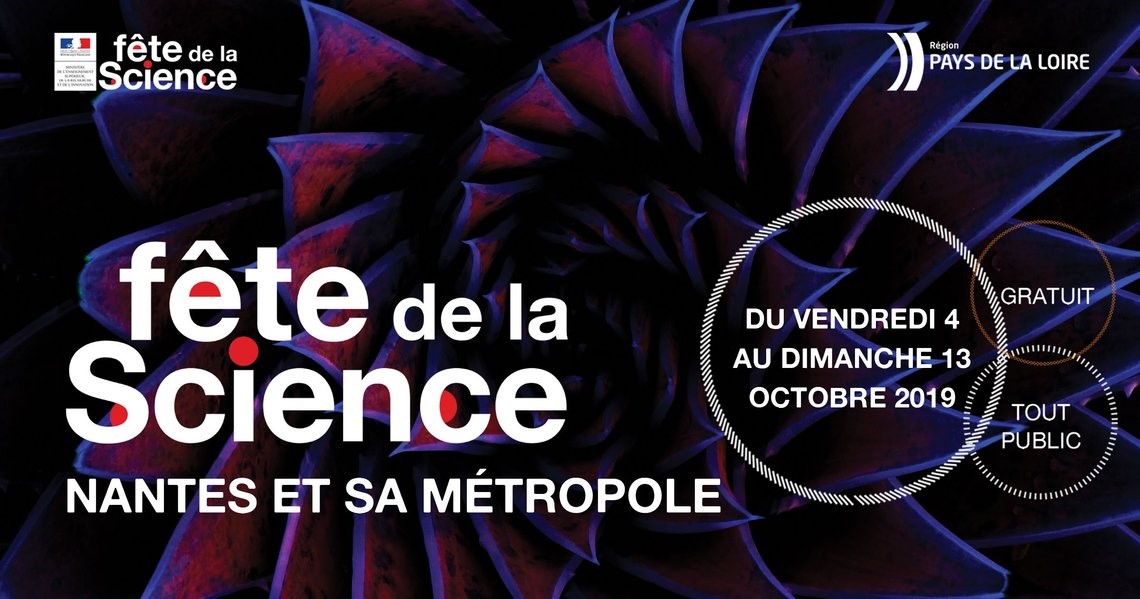 The 2019 edition of the Fête de la science took place from Friday 4 October to Sunday 13 October with the following themes: gender equality and the energy transition. In Nantes, it took place at the Ecole Centrale on Saturday 5 October with experiments and activities (exhibitions, conferences, shows, projections, etc.). At the stands, the public could experiment, test, exchange and ask questions to the researchers who had come to meet them. 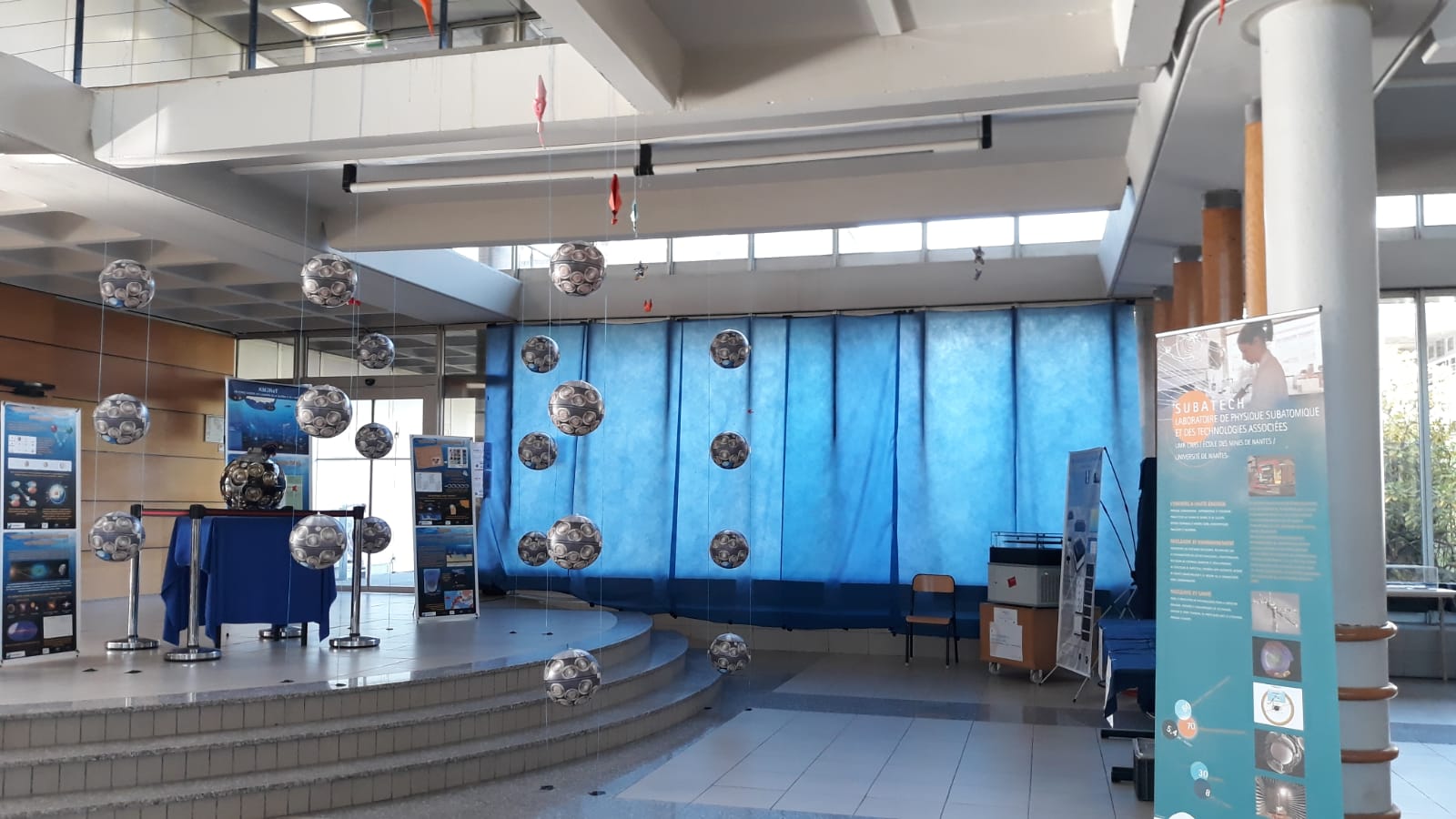 The Nuit Blanche des Chercheurs is a programme that has existed since 2017, organised by the University of Nantes. This event is at the crossroads of art and research. The aim of the Nuit Blanche des Chercheurs is to offer a free event open to the general public. Conceived as an evening event, from 6pm to midnight, this event allows the public to meet researchers. With a rich programme for all tastes, everyone can discuss and exchange. With the Nuit Blanche des Chercheurs, the researchers take up the challenge of integrating you into their world. During this one and only night, they will try to captivate and convince you in their own way, with their own words. This is the perfect opportunity to understand what research is, what work is being done and what it will change in the future. It is the perfect opportunity to infiltrate this integral part of society, so close and yet so far away.

This year's Nuit Blanche des Chercheurs took place on 11 February with the theme of the unexpected. Two Subatech researchers participated in this event which took the form of live workshops, podcasts - a different format from previous years which was adapted to the health crisis.
Access the video on the longest radioactive half-life ever measured, thanks to the XENON1T dark matter detection experiment: https://www.youtube.com/watch?v=xCFH0pIcqWE
You can replay all the speeches on the University's website : https://nbc.univ-nantes.fr/ 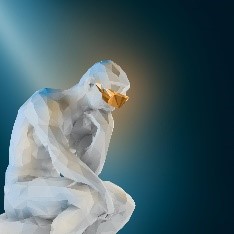 On Thursday 6 February 2020, the 4th edition of the Nuit Blanche des Chercheurs took place with the theme "Proof through images".

This event was organised in association with the University of Nantes and Stéréolux and offered different concepts: workshops, conferences, science dating, projections, exhibitions... More than 2000 people came to the event. Thanks to the presence of some members of the laboratory, Subatech participated by setting up a stand with the fog chamber and virtual reality helmets on KM3Net but also through science dating and mini conferences.

Over the past few years, some 6,000 students from more than 20 countries have been visiting high-energy physics laboratories to become researchers for a day by participating in the Masterclasses organised by CERN.
The morning is devoted to discovering research in high-energy physics: the world of particles, their detection and the associated professions. The afternoon is reserved for the exercise during which the students will put themselves in the shoes of a physicist. The results obtained are then presented and discussed during a videoconference with CERN in which other classes from around the world will also participate. The day ends with a short quiz.
Students will be able to analyse data from the ALICE experiment acquired the previous year from collisions at the LHC (the world's most powerful particle accelerator). By searching through the debris of proton collisions, the budding physicists will look for strangeness...

For its 10th participation on 6 March 2020, Subatech welcomed students from the Lycée Jules Verne in Nantes as part of the CERN Masterclasses: Discovering High Energy Research. Like every year, this event is duplicated worldwide. 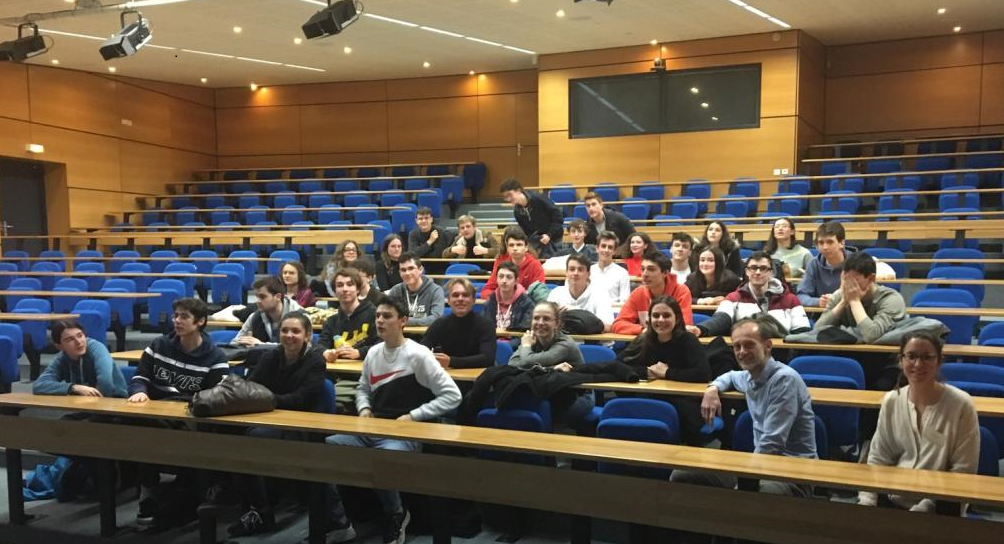 Subatech is asked to take part in symposiums and conferences organised by other units. We also sometimes speak in schools about research and scientific careers.

For three weeks in January 2019, Subatech organised scientific activities on a "Billotron" demonstrator designed and built by the LPC Caen. This device illustrates the methods with which physicists of the infinitely small (nuclear) are able to study the elementary structures of matter, here the nucleus of the atom. The device was installed on the Nantes campus. Researchers from Subatech were present to explain this device and the associated research during various demonstrations. 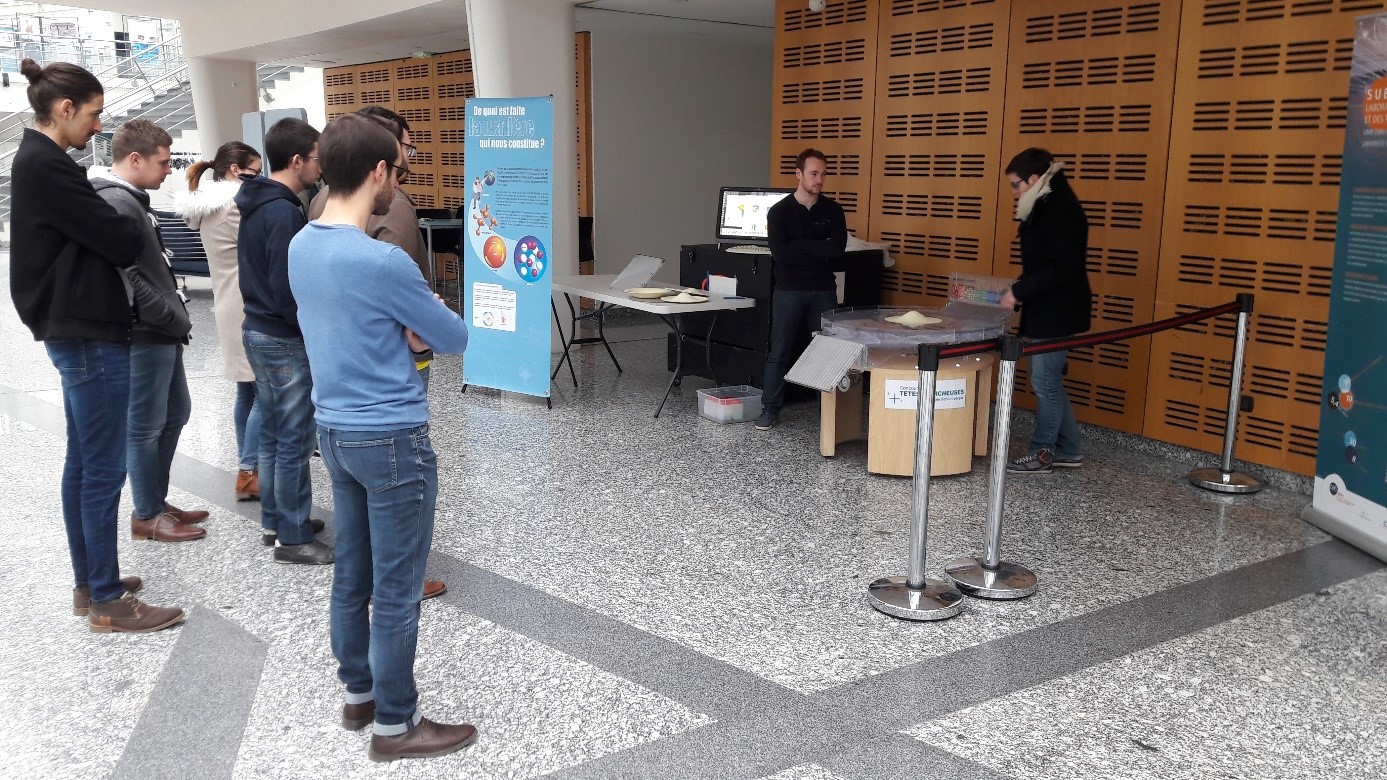 From 8 April to 24 May, an exhibition on magnetism was held at the Faculty of Sciences of the University of Nantes.
Its objective is to bring the public to discover, through experience, the principles of magnetism and its effects, at the origin of numerous applications in our daily lives, from magnets to the results of current research in the field of magnetism. It is an interactive exhibition with the public, which requires the presence of an animator at each presentation. 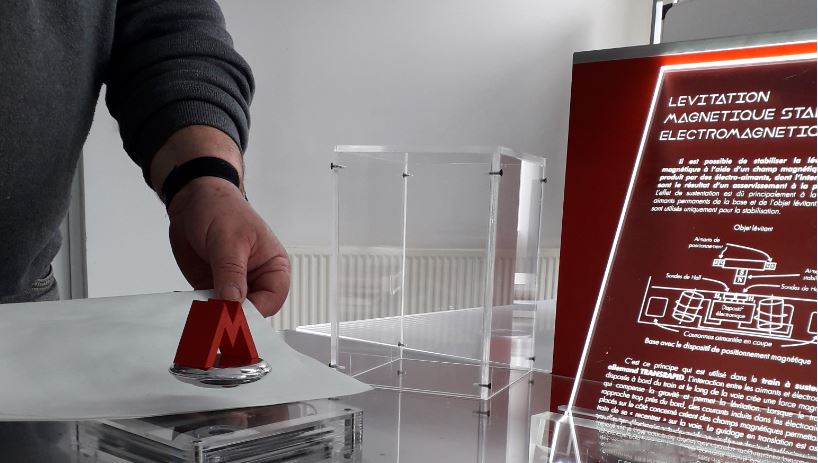 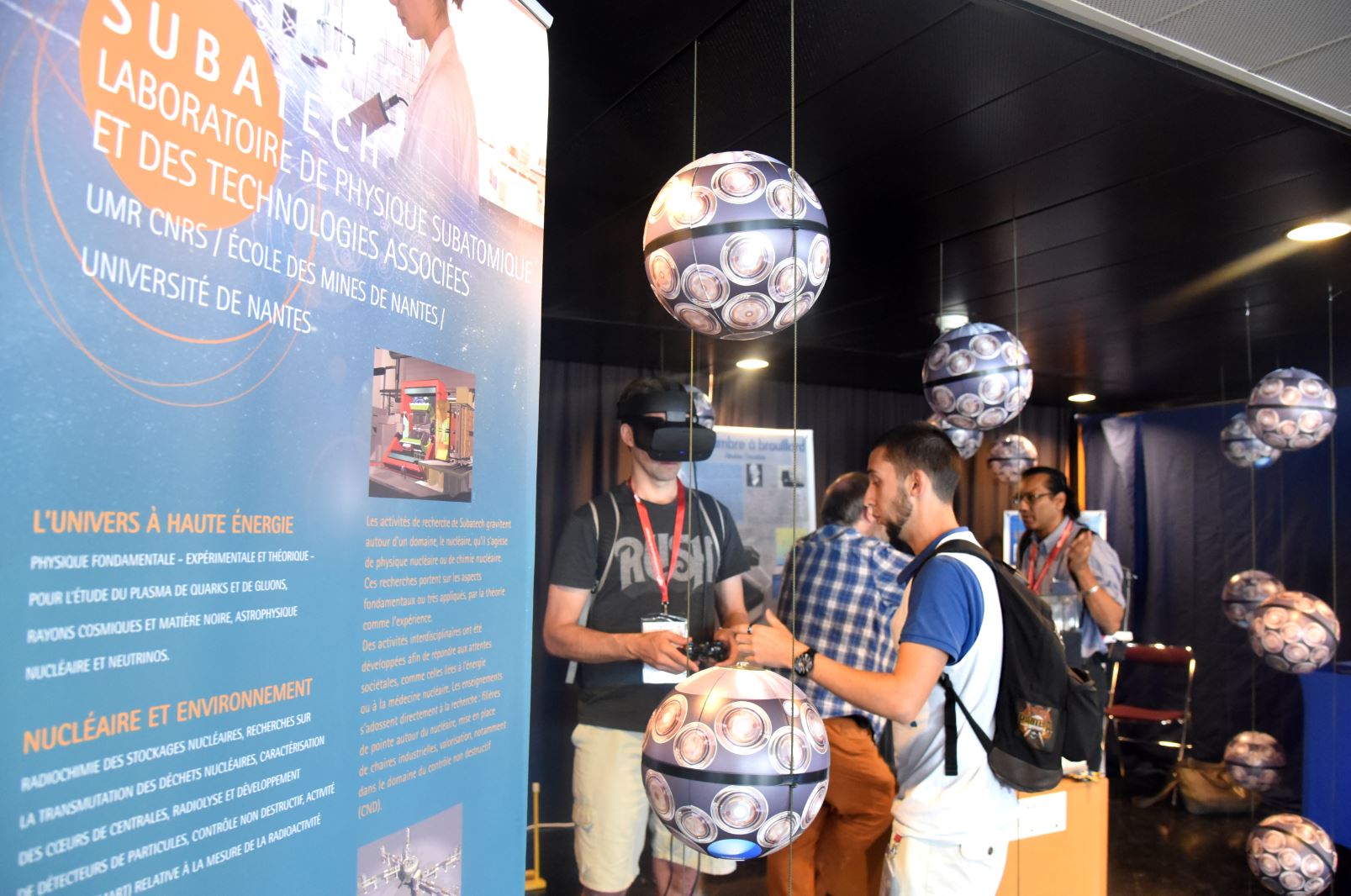