Ten years after the nuclear accident in Fukushima, studies to understand the causes and consequences of the nuclear disaster continue. After the accident, the three reactor cores melted, producing several hundred tonnes of corium and fuel debris, continuously generating heat through the radioactive decay of the fission products present in the corium.
Coordinated by Subatech, a collaboration with JAIEA, Kyshu University and Tokyo University of Technology in Japan and the French Atomic Energy Commission (CEA) has been initiated to summarise the research of the ten years after the accident.
These studies are crucial for any planning of reactor decommissioning.
The temporal evolution of water chemistry and radionuclide inventories leached from the debris by the cooling water was studied. A comparison between the concentration ratios of actinides and fission products measured in water and the results of leaching studies of spent nuclear fuel or debris simulated in the laboratory was carried out.
As with the leaching of spent fuel in the laboratory, the fractions of the 134,137Cs inventories that are analysed in the cooling water are orders of magnitude larger than those of the actinides. After more than 10 years of contact between fuel debris and water, the release rates of 137Cs remain higher than those of actinides even though the release rate of 137Cs from the debris has decreased by a factor of about 100 during this period. Actinide fixation in the debris is strong. The high stability of actinide fixation in debris makes the option of direct disposal of fuel debris as waste in appropriate containers after the decommissioning of reactors in the future viable. 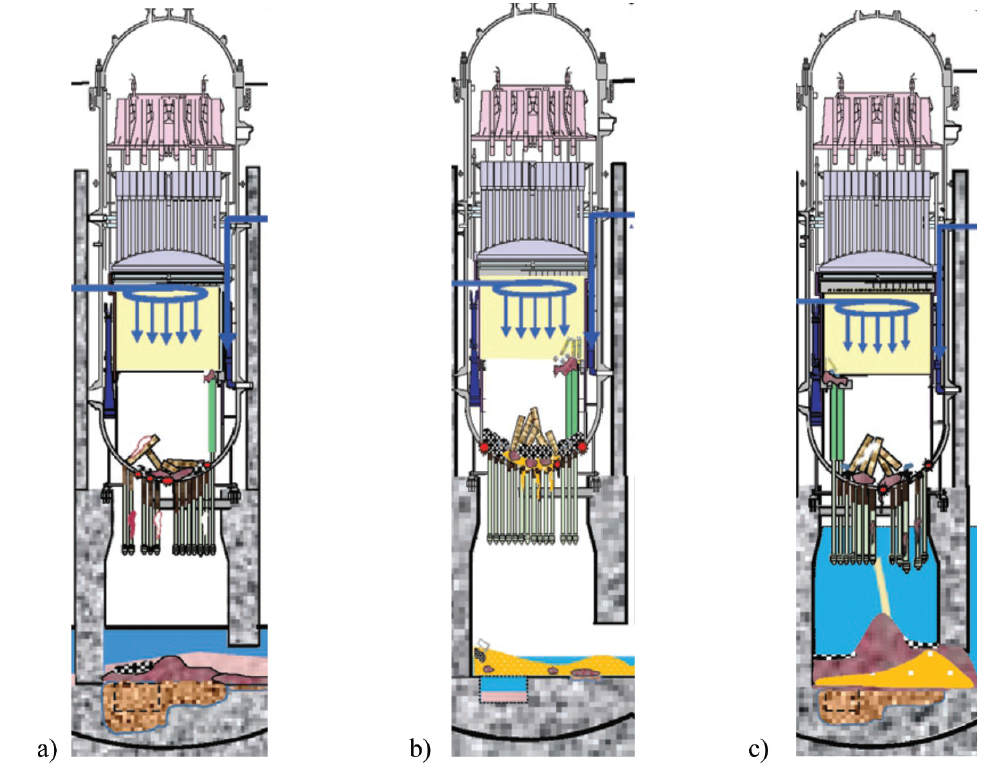 Status of reactor corres, Fukushima at 2018: a) unit 1; b) unit 2, c) unit 3. In blue: as the cooling water flowed, the cores largely melted and much of it fell onto the concrete at the bottom, references:  Mizokami S, Rempe JL. The Events at Fukushima Daiichi. Reference Module in Earth Systems and Environmental Sciences . Elsevier; 2020.

Nantes research on astatine in the spotlight 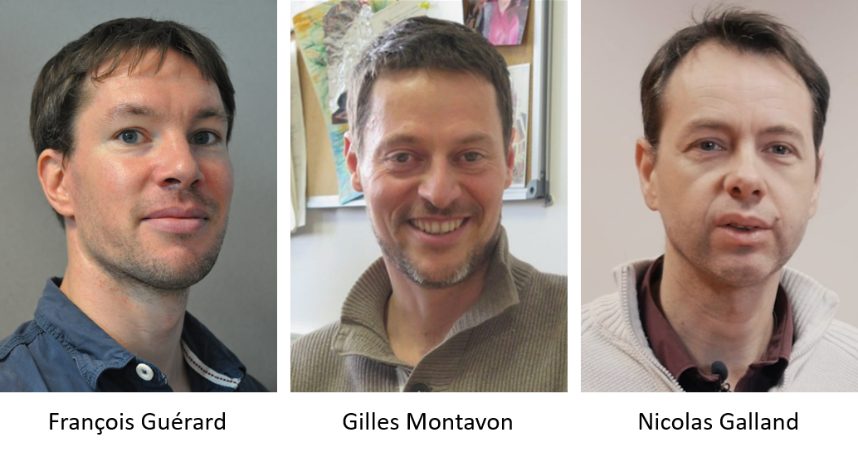 Astatine is the rarest chemical element on Earth, and its 211 isotope is very promising for applications in targeted radiotherapy of cancers. Progress in this approach depends on a better understanding of the chemistry of astatine. Researchers from the CRCINA, Subatech and CEISAM laboratories have published a 15-year review of their work in the prestigious Accounts of Chemical Research journal. The most fundamental studies has made it possible to establish the nature of the astatine stable forms in water (Pourbaix diagram) and to reveal astatine ability to form so-called halogen bond interactions, i.e. specific and very directional attractive interactions. Thanks to a collaboration established with the European Organization for Nuclear Research (CERN - Switzerland), the electron affinity of astatine was successfully determined, which is essential to better understand its chemical behavior. The production of astatine-211 by the ARRONAX cyclotron has also enabled the development of new radiochemical synthesis methods and a real leap forward in its use in cancer therapy. The region Pays de la Loire has been supporting this work since 2005; it has also benefited from funding from the Programme d'Investissements d'Avenir (IRON and ArronaxPlus projects) and from the SIRIC ILIAD, and today Nantes is become the main world player in astatine research. This recognition is distinguished at the European level by the creation of an international clinical network (NOAR COST action) which aims to demonstrate that astatine-211 can become the European standard for the treatment of some cancerous pathologies

With the creation of the OSUNA (Observatoire des Sciences de l'Univers de Nantes Atlantique) in 2008, the radiochemistry team of the Subatech laboratory positioned itself on environmental issues related to "nuclear" activities in the Loire catchment area (release of tritium from nuclear power plants, management of former uranium mines). The projects are now well structured at regional (POLLUSOLS programme), national (creation of the ZATU in 2015, collaboration with EDF, CEA-DAM....) and European (Radonorm) levels. At the regional level, the POLLUSOLS programme (2015-2021) funded by the Pays de la Loire region is coming to an end. It is in this context that several events are taking place:

POLLUSOLS project in the media

The place of radiolysis in the origins of life

The radiolysis of carbonates (CO32-), studied in the Radiochemistry team of the SUBATECH laboratory and using the irradiation beam of the Arronax cyclotron in collaboration with the ISTerre laboratory, has proved to be the explanation for the origin of life on Earth? Indeed, the radiolysis of carbonate ions produced the organic matter necessary for the development of life on Earth, thus allowing the transition from an inorganic world to an organic world.
This work, the result of a collaboration with Laurent Truche, a geochemist at the Institute of Earth Sciences at the University of Grenoble Alpes, led at Subatech by Johan Vandenborre, a CNRS research fellow, is published in the journal Earth and Planetary Science Letters.
On the same subject, an article was published in Quanta Magazine for which Johan Vandenborre, Laurent Truche and Bénédicte Menez, geobioligist at the Institut de physique du globe de Paris, were interviewed.
Read article --- > https://www.quantamagazine.org/radioactivity-may-fuel-life-deep-underground-and-inside-other-worlds-20210524/
Quanta Magazine Podcast ----> https://d2r55xnwy6nx47.cloudfront.net/uploads/2021/08/quanta-169_Radioactive-Life_FINAL.mp3 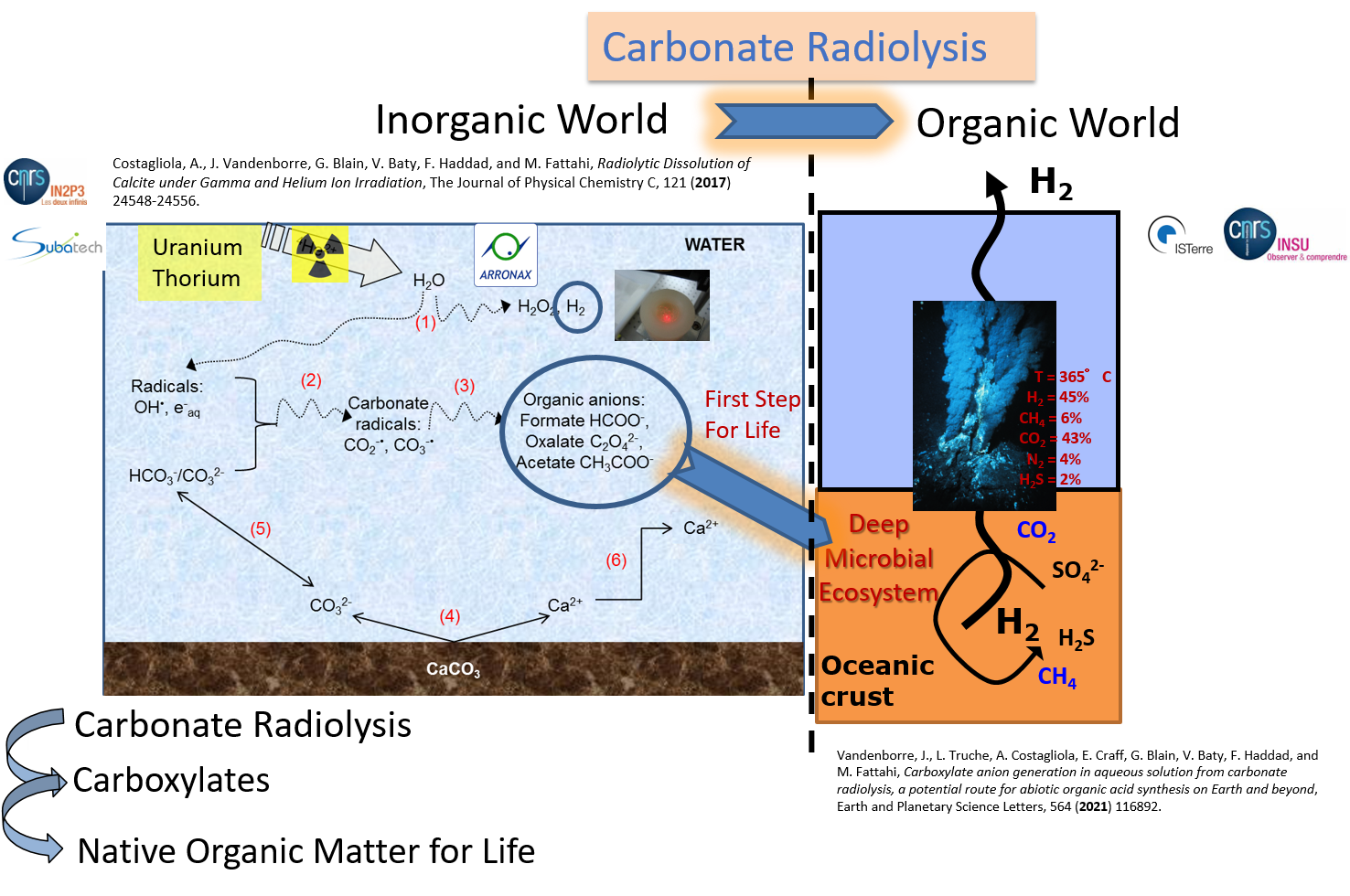 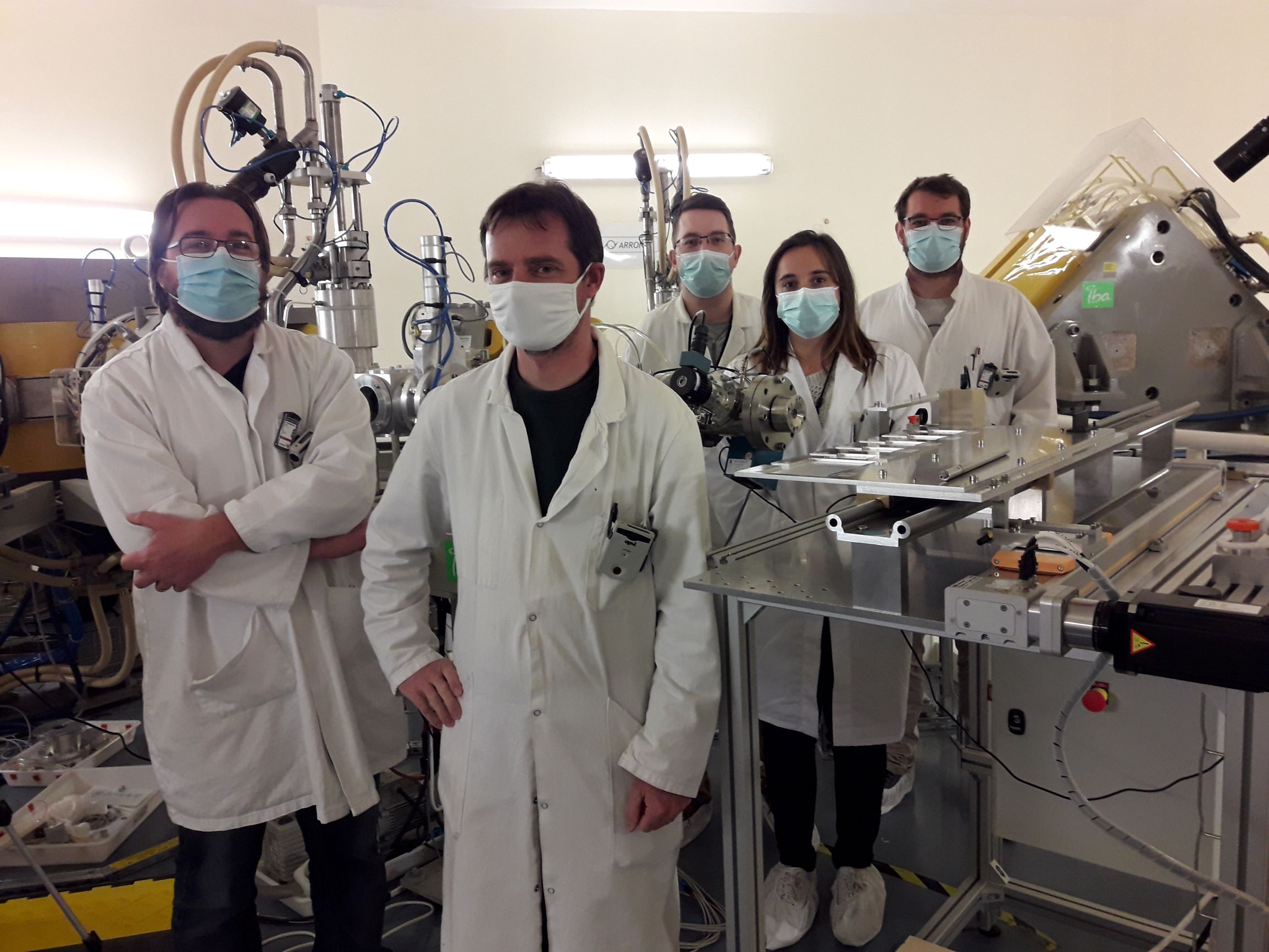 Radionuclides in the environment: societal and scientific challenges
Sub-theme : Ionising radiation and radioelements...
Key-words : Radionuclides, environment, speciation, effects, interdisciplinarity
By Mirella Del Nero , Gilles Montavon (Subatech)
Researches on the behaviour of natural and artificial radionuclides (RN) in the environment aim to assess, predict or reduce the transfers and the effects of RN (as related to their speciation) in natural systems, and intersect several societal issues : safety of future storage sites of high-level radioactive wastes, management of technologicallyenhanced naturally occurring radioactive sites.
In these contexts, the academic community positions on fundamental research around major issues (database on RN chemistry in solution and interfaces, evaluation of lowdose effects, remediation processes) as well as cross-cutting issues (modelling, state-of-the-art instrumentation). Challenges for the future are to develop multi-scale and interdisciplinary studies, which is illustrated in this article by studies on the fate of RN at the site of an old uranium mine (Rophin, Puy-de-Dôme) and the role of natural organic matter.

Theoretical radiochemistry: from the interpretation to the prediction of experiments
Sub-theme : Ionising radiation and radioelements...
Key-words : Radiochemistry, theory, methods, electronic structure, molecular dynamics
By Rémi Maurice (Subatech) , Eléonor Acher , Nicolas Galland , Dominique Guillaumont , Florent Réal , Éric Renault , Jérôme Roques , André Severo Pereira Gomes , Bruno Siberchicot , Valérie Vallet
Molecular radiochemistry is being developed for different fields of application, such as fundamental chemistry, environment, nuclear safety, and even health. Electronic structure and/or molecular dynamics calculations allow a detailed understanding of the underlying physico-chemical phenomena, and are most often added to experimental data.
This article presents recent examples from the French scientific community to show the issues and difficulties of the theoretical studies, as well as the main challenges for the coming years.

How can radioactivity cure people?
Sub-theme : …that interact with living things and to treat
Key-words : Radiochemistry, nuclear physics, radionuclides, imaging, therapy, nuclear medicine
By Cyrille Alliot , Ferid Haddad (Subatech - Arronax)
Nuclear medicine uses radionuclides for applications in imaging (positrons or γ emitters) and in therapy (α, β- and Auger electrons emitters). Most of the radionuclides used in this context are produced artificially and require the knowledge of many aspects of nuclear physics and radiochemistry to be able to achieve the expected purity for necessary activities.
Through the example of the production at the ARRONAX cyclotron, this article presents the entire production chain for medical radionuclides, emphasizing the constraints of physics and presenting the panorama of chemical techniques used.