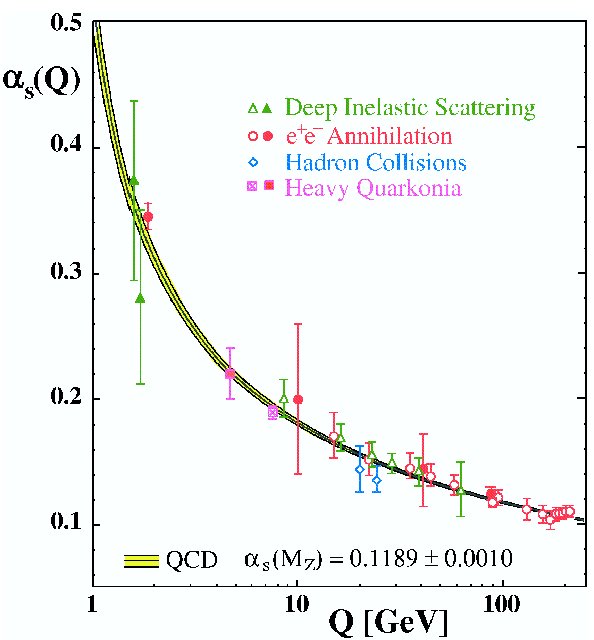 The fundamental theory of the strong interaction, Quantum Chromodynamics (QCD) is expressed mathematically in terms of only of quarks and gluons. Since its birth in the early 1970s, QCD has been (and still is) tested and verified in collisions of hadrons of energy greater than the nucleon mass (of order \(1 \,\rm{GeV}/c^2\)), thus allowing to probe the contents of hadrons in quarks and gluons. In the energy domain \(Q \gg 1 \, \rm{GeV} \), the QCD coupling constant \( \alpha_s \) becomes small (this is QCD asymptotic freedom, see the Figure), and the well-established techniques of perturbative calculations in quantum field theory can be used. Although QCD does not reach, in its predictions, the accuracy of quantum electrodynamics (QED), it is thanks to the success of perturbative QCD (pQCD) that QCD is now established as the correct underlying theory of the strong interaction.

It is thus commonly accepted that all the properties of the strong interaction should in principle result from the mathematical expression of QCD. However, some observations still resist a demonstration from first principles. In particular, the property of confinement of quarks and gluons - the fact that the only particles sensitive to the strong interaction and being observed experimentally are hadrons and not isolated quarks and gluons - is not fully understood. Similarly, the physical origin of the mass of hadrons remains mysterious, despite the success of lattice QCD calculations to predict hadron masses. Issues of confinement and hadron mass involve the GeV energy scale, where \(\alpha_s \) is of order 1, making pQCD a priori inapplicable.

As long as the dynamics of confinement of partons (quarks and gluons) into hadrons is not understood, two complementary descriptions of the processes governed by the strong interaction will be relevant:

Within this general framework, an important theme is the study of the quark gluon plasma, which is part of the extensive program of experimental heavy ion collisions. The main purpose of this program is to study the phase diagram of nuclear matter (and more generally of hadronic matter) by compressing and heating the colliding ions. This topic has known a major progress in particular with the advent of large colliders (RHIC at BNL and LHC at CERN) which allow, during the first moments of the collision, to reach energy densities similar to those that prevailed a few moments after the Big Bang, so that quarks and gluons, which are usually confined within protons and neutrons can travel almost freely, forming a new state of matter called the quark gluon plasma (QGP). The major challenge is to prove the existence of such a state and to characterize its physical properties.

The HE theory group in Subatech follows various lines of research, differentiated by the energy range considered.

Our group is also involved in other areas of research: