Decay heat is the heat released after the reactor shutdown as a result of radioactive decays of the fuel isotopes and delayed fissions. The determination of decay heat is a major safety issue for a reactor in operation or in accidental conditions but also for the transport of burnt fuel and nuclear waste management. It is in particular a key  parameter for the design of the Generation IV reactors safety systems but also for the use of innovating fuels. Few decay heat  measurements are available. Hence there is a real need to have  reliable codes to estimate the decay heat associated with its uncertainty. The calculation of decay heat relies on the combination of reactor simulations to estimate the fuel inventory and on nuclear data used as an input : decay properties of the fission products and  actinides, fission yields and cross sections.

Since 2015, the impact of new TAS measurements of the β- and γ mean decay energies of some key fission products on the decay heat calculation of thermal/fast fission pulses has been calculated with the SERPENT2 code. 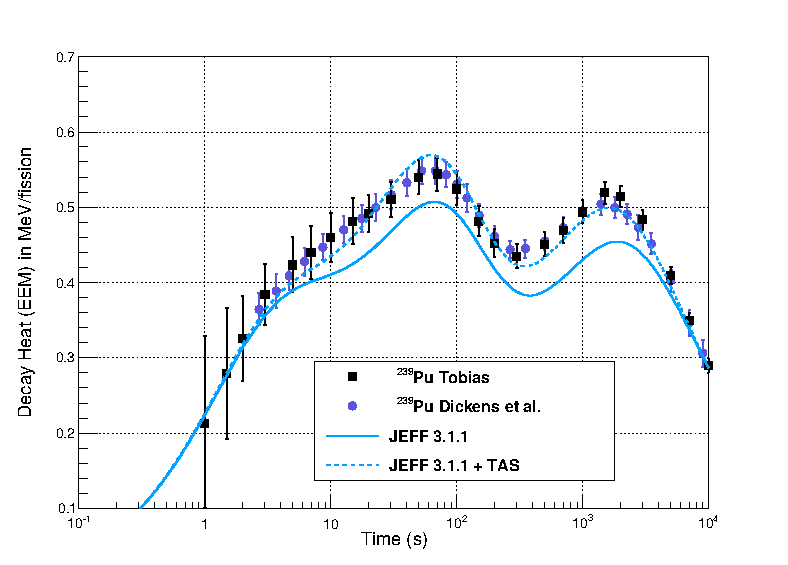 Gen IV reactor cores, such as SFR or MSFR are also modeled with SERPENT and used to identify main fission products contributors to the decay heat which are potentially biased by the Pandemonium effect. This will help to determine a list of key nuclei for GEN IV reactors to be re-measured with the TAS technique and then contribute to the improvment of quality of the decay data librairies. 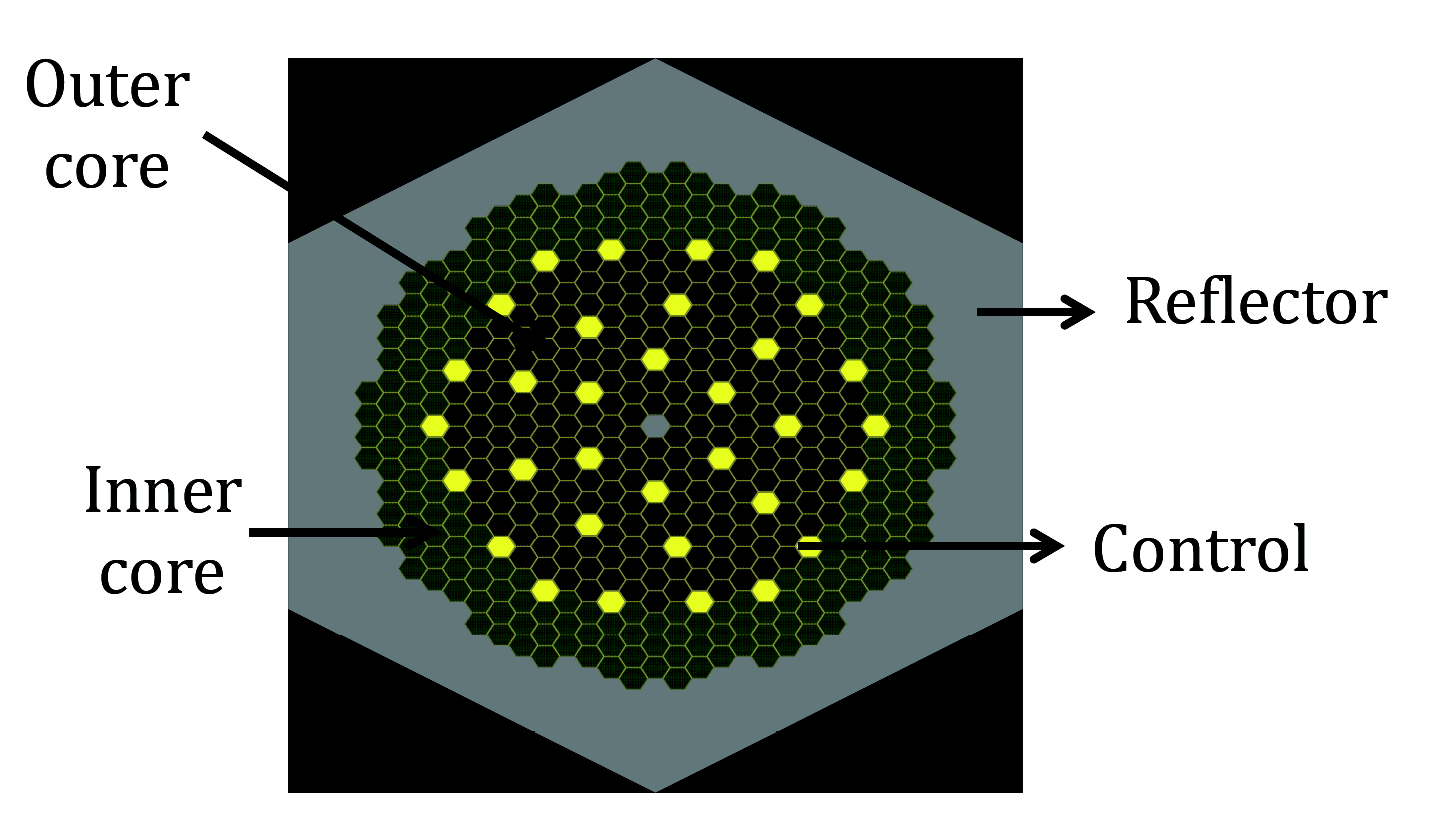 To carry out in the future decay heat calculations with associated uncertainties for Gen IV concepts at a demonstrator stage, it is needed to perform some work on the validation and qualification of the SERPENT2 code ; especially for the decay heat calculations of existing reactors, and some comparisons with measurements for PWR assemblies have been already performed. Some decay heat benchmarks (calculations/measurements) were performed with the SERPENT2 code coupled to JEFF3.1.1, JEFF3.3 and ENDF7.1 librairies for PWR  assemblies: Point Beach 2, San Onofre 1, Turkey Point 3, Ringhals 2 and 3. Similar work is on-going for BWR assemblies but also some comparisons with other Monte-Carlo codes. 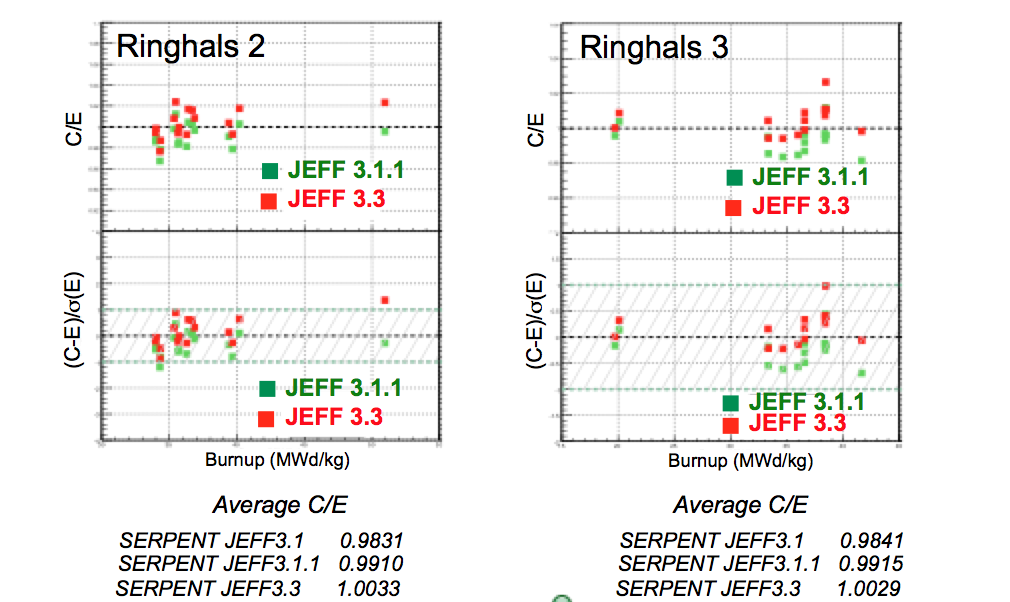 The work performed at the SUBATECH laboratory on decay heat calculations for Gen IV concepts is also part of the MSFR collaboration (LPSC, IJClab, SUBATECH). The Molten Salt Fast Reactor (MSFR) is a reactor concept using molten salts to be operated in Th/U or U/Pu cycles with a fast neutron spectrum. This concept has been developed by the LPSC laboratory since 15 years with a SUBATECH contribution since 2015. The MSFR concept was chosen in 2008 by the Generation IV International Forum for further studies. 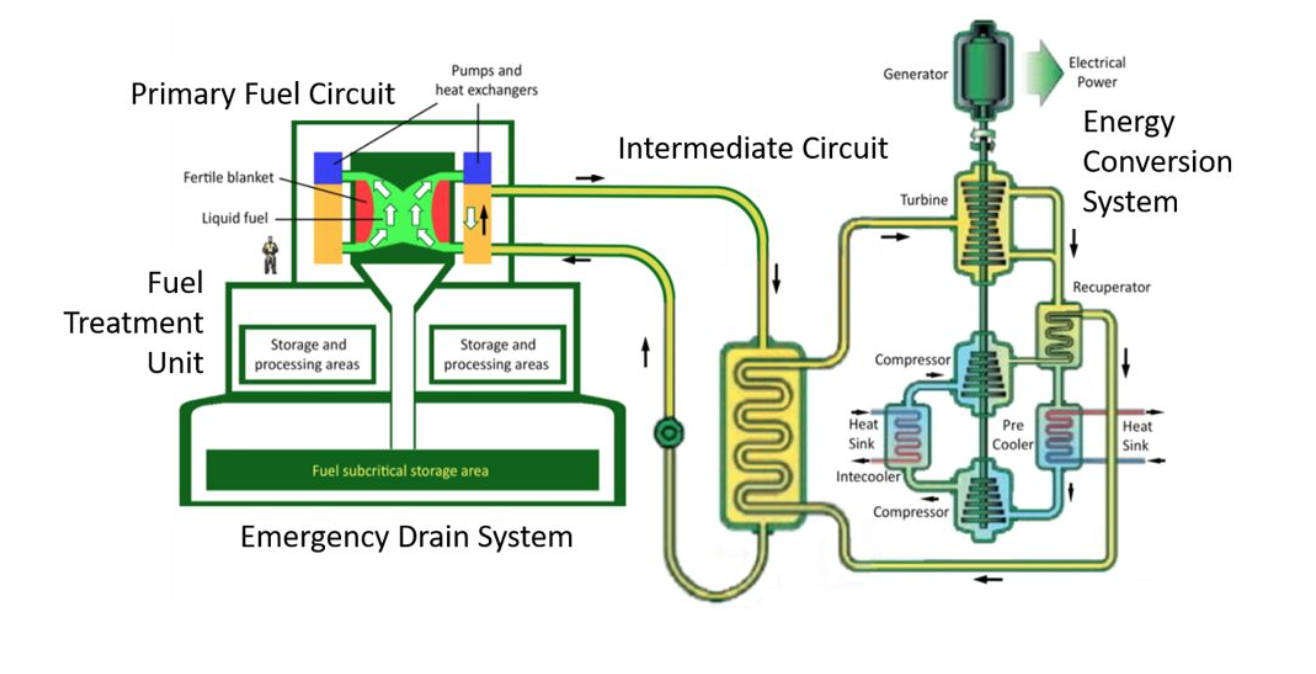 This reactor associated to a fuel treatment unit (FTU) during the  operation is based on a liquid fuel which will circulate between the core and the heat exchangers. In the MSFR, the liquid fuel processing is part of the ractor where a small side stream of the molten salt is processed for fission product removal and then returned to the reactor.The SAMOSAFER european project was launched in 2019 aiming to evaluate the reactor safety level. SUBATECH is in charge of the decay heat source term estimation for the core, the FTU and the draining tank. Within this frame, the SEN is in charge of the definition and coordination of a benchmark aiming to validate simulation tools ((CNRS, CEA, POLIMI, PSI) for the source term calculation in case of radioactive release associated to a severe accident situation.

In parallel, some work was started on the estimation of the uncertainties associated to the decay heat calculations and especially the impact of nuclear data by using approaches based on the Total- Monte Carlo method (TMC).